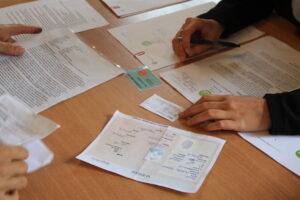 Minosia Labyrinth is an interactive and educational role play- and simulation game (EduLARP) about migration in Europe. It aims to raise awareness on the complexities of the migration process and the difficulties migrants and refugees face in Europe. In the game, players move within a kind of labyrinth of institutions and interactions with other players. In this way, they encounter various barriers, such as laws and regulations, deadlocked bureaucracy, language barriers, racism and discrimination, (de)privileges and prejudices. By “following in the footsteps” of a migrant, refugee – or, for example, a lawyer, journalist or immigration officer – the reality of migrants and refugees becomes more tangible. The game thus creates empathy and increases understanding for migrants and refugees. In addition, the game offers a reason and various methods to subsequently enter into a conversation about (institutional) racism, discrimination, privileges and stereotypes.

Minosia Labyrinth is a game that takes place in Minosia, a fictive country in Europe where a considerable number of migrants arrive due to different reasons. In the country there are about 10 official stations related with migration procedures, such as: Immigration Office, Asylum Centre, Language School, Border Police etc. Migrants have a wide range of options to migrate to Minosia but the most important objective for them is to integrate completely in the country, which means achieving a legal status, learning the language and finding a job. However, as in European reality, reaching these aims isn’t as easy as it seems…

Minosia Labyrinth is a new non-formal educational tool that has been developed by a consortium of 4 partner organizations from The Netherlands, Germany, Italy and Romania during a 3-year project co-funded by the Erasmus+ Program of the European Union. There will be 5 different versions of the game, a European version and 4 national versions according to the partner countries.

Minosia Labyrinth has been developed as an educational toolkit for use in various (non-formal) educational sectors. The game is suitable for multipliers in various fields, such as non-profit organizations, schools, universities, teachers, social workers, youth workers, volunteers and professionals who work for and with migrants and refugees. The direct target groups learners and trainees in (non-) formal adult and youth education from different fields, age and background. However, the game can also be used very well as a training method for people who work in the migration field and who deal with migrants and refugees on a daily basis. The game offers a unique opportunity to start a dialogue and reflect on themes such as inclusion and exclusion, discrimination, prejudice, (institutional) racism, privileges, human rights and colonialism. The game has been specially developed for people in a privileged position.

Minosia Labyrinth is designed to be played in any location with a minimum of 25 participants. The duration of the game is between one day and two days, depending on the desired modules, complexity level and group size.