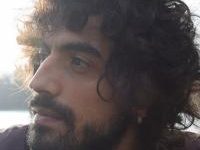 Raafat is responsible for the illustrations and taking part in the development of the simulation game. Raafat was born in Al Swaidaa, Syria, in 1990. Having grown up in an artist family drew him toward paintings and drawings in his childhood. As art became part of his life he studied in Damascus university at the faculty of fine arts from 2008 to 2014. During his art education, he developed himself as a painter. He lives now and works in the Netherlands. In his work he uses art as a tool for people to express emotions different than with words, especially for people who experienced war or any kind of conflict.